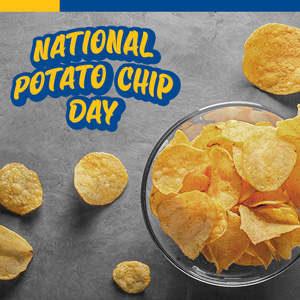 Toronto – March 11, 2020 – National Potato Chip Day is celebrated across the country on March 14 – a day in which Canadians gather to celebrate the country’s #1 snack food.

The origin of the potato chip can be traced back to 1853 where they originated as chef-cooked restaurant fare, but later went on to be mass-produced for home consumption in the 20th century. Flavoured chips were then introduced in the 1950s, and now potato chip revenues total over $15 billion annually worldwide.
Chips are Canada’s most popular snack food, accounting for nearly 60% of the domestic snack food market.

Whether you like kettle cooked, ruffled, flavoured, or other types of chips, National Potato Chip Day is the perfect excuse to eat delicious, Canadian-made chips.

UFCW Canada members proudly produce a number of amazing potato chips, including the items listed below.

Looking for other delicious UFCW-made foods?

As the voice of food workers in Canada, UFCW represents hundreds of thousands of workers in the food retail, manufacturing, and processing industries, as well as the agricultural sector. UFCW Canada members feed the nation and work in every aspect of the food industry, from farmers’ fields to processing plants to grocery stores across the country. Check out more UFCW-made foods in our Great Canadian Food Products guide today.