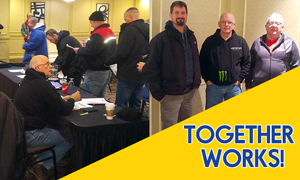 Under the new three-year contract, the beverage members at Coca-Cola London will receive a lump sum payment of $800 in the first year of the agreement, as well as wage increases of 2 percent and 2.5 percent in years two and three, respectively.

Drivers who require a Driver’s Medical Exam will receive a reimbursement of $100 from the company in the second and third year of the contract term. And members will also benefit from an enhanced payout of 125 percent for any unused sick days.

In addition, the Coca-Cola members will now take part in an employer pension plan that will see the company contribute 5 percent of an employee’s annual earnings, with members contributing 2 percent of their earnings. As well, the new agreement contains enhanced severance language for all union members.

To read more about the new contract for the Coca-Cola London members, click here.