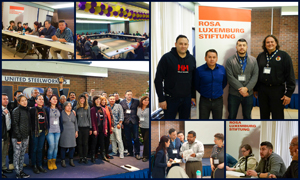 The dialogue throughout the conference centred on building worker-to-worker solidarity, and was led by a variety of experts and panelists from across North America.

UFCW Canada National Representative Pablo Godoy and AWA Organizer Santiago Escobar participated in a number of discussions on the increasing precarity that workers are facing in the labour force, as well as the ongoing fight for migrant workers’ rights in Canada. Several farm workers were in attendance to share stories of their struggles labouring in Canada, and many of them emphasized the need for better labour protections for agriculture workers.

During the conference, activists also learned about several campaigns aimed at supporting farm workers in the U.S. state of Washington and in Baja California, Mexico.

"The amount of solidarity on display at this conference was truly incredible,” says Brother Godoy. "It's always encouraging to see activists and workers’ organizations from across the continent come together to discuss ways to strengthen the rights of workers,” he adds.