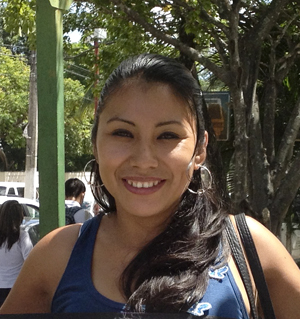 Villahermosa, Tabasco, Mexico  — Linda Marlene Alvarez Mendez, widow of Crisanto Jimenez Gomez, has received a $2,500 insurance benefit following the accidental death of her husband earlier this year in Canada. As a member of the Agriculture Workers Alliance (AWA), Mr. Gomez was automatically covered by a no-cost accidental death policy issued by the American Income Life Insurance (AILI) company — the result of an historical agreement reached between AILI and UFCW Canada in September 2011.

Mr. Jimenez was a migrant farm worker who had been working each season for the past six years in Canada under the Seasonal Agricultural Workers Program (SAWP). He was killed in July 2012, in a tragic road accident near Leamington, Ontario.

“My husband traveled to Canada every year to make sure that I and our two children had a better life”, said Linda Alvarez. “We never thought that saying goodbye this year would mean saying goodbye forever. I want to thank the Agriculture Workers Alliance. Their help comes at a time when it is much needed.”

Every AWA member is covered, at no cost, by the Accidental Death and Dismemberment Plan which pays a $2,500 benefit to the family of an AWA member who accidentally dies while contracted to work in Canada. While Mr. Jimenez, like all migrant workers, also contributed 4.95% of his Canadian earnings to the Canada Pension Plan (CPP), his widow and children will not receive any benefit from the plan because stringent requirements typically mean most migrant workers' families are ineligible for survivor or death benefits. Mr. Jimenez did have some private insurance; it can take some time to process, so the AILI benefit the family has received from the AWA will provide a critical safety net until then.

“The insurance program for AWA members cannot soften the pain, but is meant to supply some immediate protection to families who have suddenly lost a breadwinner," says Wayne Hanley, the National President of UFCW Canada. "We will continue to work with AILI to provide this critical benefit for the families of AWA members faced with such a tragedy."

More than 11,000 domestic and migrant agricultural workers are members of the AWA. The AWA's ten agricultural worker support centres across Canada offer a number of support, training, and advocacy services at no cost to its members, including coverage under the AILI Accidental Death and Dismemberment Plan.