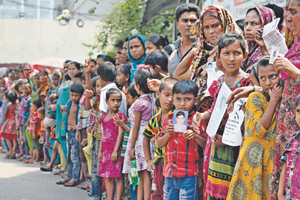 Toronto – June 13, 2015 – The global fund established by the United Nations and the International Labour Organization (ILO) to compensate victims of the Rana Plaza factory collapse and their families has finally reached its fundraising goal of $37 million. The breakthrough comes over two years after the tragic factory collapse in Bangladesh claimed the lives of more than 1,100 workers.

Now that the fund has reached its goal, nearly 5,000 compensation awards will be distributed to victims and their families in the coming weeks.

Loblaw's was among the first to donate to the fund, contributing nearly $3.3 million and signing onto the Bangladesh Accord on Fire and Building Safety, which uses independent, third-party inspectors to improve labour conditions for garment factory workers in Bangladesh.

Over 1,000 factories have been inspected under The Accord since it was formed. By signing onto the Accord, retailers commit to putting workers before profits at their supplier factories. Other companies, such as Walmart, have continually refused to sign The Accord.

Recently, the Group of Seven (G7) developed nations – which includes Canada and the United States – pledged to strive for better application of labour, social, and environmental standards in global supply chains, which could potentially prevent another Rana Plaza tragedy from occurring.

In a joint declaration following the G7 summit in Germany, the leaders of the seven countries stated that "unsafe and poor working conditions lead to significant social and economic losses and are linked to environmental damage. Given our prominent share in the globalization process, G7 countries have an important role to play in promoting labour rights, decent working conditions and environmental protection in global supply chains."

The leaders also committed to focusing on standards set by the United Nations and the ILO and to "encourage enterprises active or headquartered in our countries to implement due diligence procedures regarding their supply chains."

"While it is unfortunate that it takes a tragedy of this magnitude for nations and companies to realize the importance of worker safety, we applaud the G7's acknowledged responsibility to promote decent working conditions in developing countries," says UFCW Canada National President Paul Meinema. "Going forward, commitments need to be turned into actions to stop tragedies like the Rana Plaza collapse from ever happening again," Brother Meinema adds.