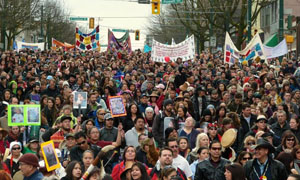 Toronto – February 6, 2015 – February 14th Annual Memorial Marches will take place across Canada on Valentine’s Day. These marches were first held by grassroots movements and committed citizens following the death of a local indigenous woman in 1991 in Vancouver’s downtown Eastside. Since then, February 14th Memorial Marches have been held yearly across the country.

We must push for an inquiry that looks at ways of eliminating violence against women in Canada. An inquiry that addresses the systemic discrimination when it comes to indigenous women’s experience with violence is vital in keeping women safe. Women and men who come together to participate in the February 14th Memorial Marches across Canada this Valentine’s Day will send a strong message of solidarity with missing or murdered women’s families, their loved ones and the ones they left behind.

Every march sends a resounding message that violence against women must be stopped.

To find out about marches in your local area, check out the February 14th Memorial March movement webpage or facebook event page.