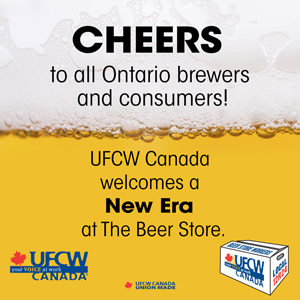 Toronto – January 7, 2015 – Beer drinkers, Ontario-based brewers, and UFCW Canada are welcoming a new era at The Beer Store in Ontario with the announcement that all Ontario-based brewers have been invited to be owners of the Ontario beer retailing network. A new distribution agreement that was also announced means that consumers across the province will see their favourite beers from local micro-breweries in their community, readily available at their neighbourhood Beer Store.

“This is great news for consumers, Ontario-based brewers, and for the thousands of Ontario communities where UFCW Canada members welcome theirneighboursto the Beer Store,” says Rob Edwards, the president of UFCW Canada Local 12R24. More than 6,000 Local 12R24 members work at The Beer Store retail and warehouse locations in Ontario. “The changes mean more input and opportunity for Ontario-brewers and more choice for Ontario consumers at the lowest average retail beer prices in Canada.”

What won’t change is the The Beer Store’s tremendous leadership in responsible selling and environmental stewardship. In 2014, more than 3.7 million customers were challenged, to protect against purchases by minors or intoxicated customers. The Beer Store also recycles more than 2 billion beer, wine, and liquor bottles annually. The new changes regarding expanded ownership opportunities and distribution are effective immediately.

“It is a new era,” says Paul Meinema, the National President of UFCW Canada, “and a welcome response to consumers, Ontario-based breweries, and the community’s demand for responsible retailing.”