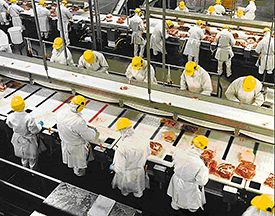 The new agreement sees wage improvements from $1.95 to $2.65 per hour over the life of the contract. Along with other monetary improvements to premiums, pension and vacations, members will also see lots of improvements to contract language.

One of the big improvements members are happy to see is language on a new cafeteria built so they can enjoy their breaks. Currently, members lose time crossing the plant to the break room, and with their gowning up and down times factoring in, it made it hard for members to utilize their break time.

“This is a strong contract for the members, and it also shows that Maple Leaf is working on stabilizing its workforce. With changes to the use of temporary foreign workers and hog shortages for the company, this contract is the first step in getting the plant back to full operation,” stated UFCW Local 832 President, Jeff Traeger, who was the lead negotiator for this new agreement.