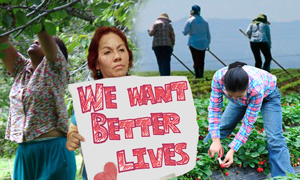 Through a number of human rights complaints filed in Mexico and Canada, UFCW Canada is pressing for changes to the selection, hiring, and placement of Mexican migrant workers under the SAWP.

UFCW Canada is asking the British Columbia Human Rights Tribunal to conduct an inquiry into gender-based discrimination practiced by SAWP employers in B.C. against Mexican migrant agricultural workers. The SAWP's recruitment and selection process allows an employer to inform Mexican authorities of their specific gender preference for a potential employee, and many SAWP employers request male workers over female employees.

On average, women comprise less than four percent of the thousands of migrant agricultural workers who come to Canada and participate in the SAWP each year. The Mexican government has contributed to this trend by publicly declaring that, under the current Memorandum of Understanding between Mexico and Canada, SAWP employers have every right to discriminate against migrant agricultural workers based on their gender. Canadian agribusinesses – confronted with similar human rights complaints in other provinces – are claiming they are blameless in the matter.

However, the practice of gender-based discrimination in hiring migrant farm workers violates Mexican and Canadian legislation, as well as international treaties on discrimination and equal access to employment. As a result, UFCW Canada is asking the British Columbia Human Rights Tribunal to investigate the SAWP's discriminatory recruitment and selection process, and is pressing for changes to the process that will end discrimination against Mexican women who are interested in participating in the SAWP.