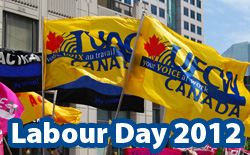 Year after year, Canadians honour Labour Day as part of a national tradition that dates back more than a century. Across the country, workers of all professions come together to advocate for justice and progressive change, and to send a message to politicians that the rights and needs of working people must be respected.

Until recently, Labour Day was a time to celebrate the continual achievements of working class citizens. Both in Canada and the United States, the extension of collective bargaining rights to workers ushered in a new era of shared prosperity in which the percentage of national income taken by the very rich was reduced significantly. For much of the post-World War 2 period, the substantial power of labour unions at the bargaining table and in politics produced wage raises and improved working and living standards for unionized and non-unionized workers alike. Most people received a reasonable wage for a fair day's work, and good jobs with generous benefits and a livable pension were not uncommon.

But after three decades of assaults on unions from governments, the courts, and employers, union membership is declining in North America and, as a result, income inequality is rising. As one example, wages for most workers in Canada rose by just $2 per hour between 1981 and 2010, while the mean compensation of the country's highest-paid CEOs skyrocketed to 219 times the pay of the average worker. It is no wonder, then, that the message of Occupy Wall Street is resonating with workers everywhere.

With working people under attack from the private sector and all levels of government, Labour Day presents an opportunity to demand fairness from our employers and elected officials. This Labour Day, we are standing up for fair pay, good jobs, and retirement security for all Canadians, and we are saying "no" to endless corporate tax cuts.

We are calling for better wages because median earnings in Canada have increased by less than $45 a year since the mid-1970s, and Canadians deserve fair pay for a fair day's work. We are demanding good jobs because Canada has an unacceptably high unemployment rate of roughly 7 percent, which means some workers - especially young people - can't even find a fair day's work. We are standing up for livable pension plans because Canadians who put in a fair day's work for most of their lives should not be forced to live in poverty once they retire. And we are saying "no" to corporate tax cuts because it's time for business to pay its fair share. While working people struggle to get good jobs, fair wages, and a pension, and public services are being slashed by every level of government, big business is receiving continuous and substantial tax cuts that are financed by our tax dollars.

Of course, unions remain the best protection against corporate greed and government inaction, as unionized workers typically earn higher wages and are much more likely to have benefits, job security, and a pension plan than their non-union counterparts. But if we want working and living standards to improve for everyone, it is vitally important that all workers - unionized or not - stand up this Labour Day and make our voices heard. I encourage you to attend your local Labour Day event and demand fair pay, good jobs, and retirement security for all workers, while making it clear that Canadians will not tolerate any more reckless corporate tax cuts. By taking simple actions such as attending your local Labour Day rally and electing governments that are committed to reducing poverty, we can make a renewed push toward achieving shared prosperity and restoring the middle class in this country. I wish you a happy Labour Day.