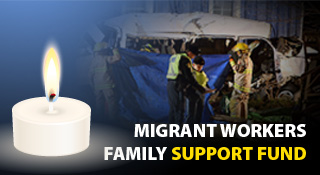 The UFCW Canada Migrant Workers Family Support Fund, set up to support the families of the 11 deceased workers and three survivors of a horrific February collision near Hampstead, Ontario, is set to close on July 31, 2012.  After this date it will not be possible to donate to the fund.

Of the 14 individuals involved in a car accident, 13 were working as migrant agriculture workers, some of whom had only recently arrived in Canada. As of July 10, 2012,  the fund has collected over $226,000 from UFCW Canada local unions, the labour movement, community organizations, faith groups, and individuals from across Canada in response to the tragic Hampstead vehicle accident of February 6, 2012.

Some of the UFCW CanadaMigrant Worker Family Support Fund money raised has been already distributed to the survivors and victims’ families.

Two cheques in the amount of $15,000 each were distributed on May 9, to two of the survivors, Javier Alba Medina and Juan Jose Ariza, who are now residing in a London, Ontario long-term care facility and receiving physical and psychological therapy for their injuries.

UFCW National President Wayne Hanley was on-hand to distribute the funds and pass on condolences from communities, organizations and individuals who donated to the support fund. “In a moment of terrible loss and grief, Javier and Juan Jose are human examples of courage and perseverance. The suffering that these young men have endured has been the price they paid for a dream they came with to build a better life for their families back home. We stand with them in their struggle to persevere in the face of adversity here in Canada.”

Teresa Fulton, widow of Ontario truck driver Christopher Fulton who was killed when his vehicle collided with the 14-passenger van on February 6, was presented a cheque for $15,000 on May 31.

On June 22, 2012, a cheque totalling $15,000 was presented to the family of Peruvian migrant worker Edgar Sulla Puma in Hamilton, Ontario.  Having recently awoken from a coma following the accident, Mr. Sulla Puma’s family accepted a share of the funds on his behalf.

A cheque for $15,000 was presented to Carolina Enamorado, widow of Nicaraguan worker Juan Castillo, on June 8.

Shortly after the close of the UFCW Canada Migrant Worker Family Support Fund on July 31, 2012, individual disbursements will be made to each of the widows of nine Peruvian workers who perished in the crash, and a second distribution will be made to the survivors and the families of victims.

Please note that Charitable Tax Receipts for income tax purposes cannot be provide as the Migrant Workers Family Support Fund is not a registered charity.

100% of the monies collected through the Migrant Workers Family Support Fund will be divided into 14 equal portions and sent to the survivors and families of deceased workers once the fund is closed on July 31, 2012.

Condolences can also continue to be sent to the families through the special memorial Facebook page: Hampstead Tragedy Memorial Page. The page marks the contributions that agricultural workers make to our food supply and the Canadian agriculture industry, and it commemorates workers who were injured or have perished on the job.