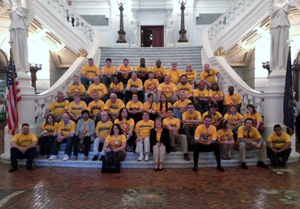 Thousands of UFCW members at the Pennsylvania Liquor Control Board (PLCB) will keep their jobs after an attempt to privatize the state-owned liquor stores failed to garner enough support in the Pennsylvania House of Representatives.

In mid-June legislators debated a Republican-backed bill that sought to eliminate the PLCB and its 600 stores and transfer liquor sales to the private sector. If the bill had passed, it could have potentially jeopardized the jobs of 4,000 unionized PLCB employees, most of whom are represented by UFCW Locals 1776 and 23 and the American Federation of State, County, and Municipal Employees (AFSCME).

To fight the bill, UFCW Locals 1776 and 23 built an extensive coalition with other unions, beer manufacturers and wholesalers, state Democrats, and a handful of Republicans. Led by Local 1776 President Wendell Young IV, the coalition argued that privatization would eliminate $500 million in transfers to schools and hospitals, result in thousands of job losses, and lead to higher prices for consumers. Throughout the House debate, Young, UFCW staff members, and a group of PLCB workers met with lawmakers to shore up support for their position while donning the union's signature yellow and blue colours.

The coalition won the day, as the Republican House Majority Leader and sponsor of the bill, Mike Turzai, admitted that he lacked support to approve the legislation. "We can't get it over the goal line (and) there has to be consensus," Turzai told the Pittsburgh Post-Gazette. He has delayed a vote until the fall.

With a potential vote looming in the September legislative session, the anti-privatization coalition will be lobbying lawmakers over the summer to ensure that "House and Senate members continue to understand that privatization is wrong for our families, our communities, and all Pennsylvanians," says President Young.