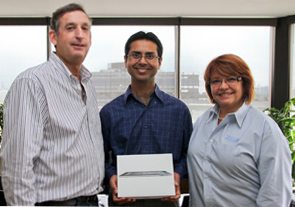 On June 12, UFCW Canada National President Wayne Hanley and UFCW Canada Local 1000A President Pearl Sawyer presented an iPad to Local 1000A member Upender Brar, who won the UFCW Canada NDP Membership Contest by signing up the highest number of new party members in the lead-up to the federal NDP Leadership Convention this past March.

Upender works at the Maple Leaf Consumer Foods Canning Division in Mississauga, Ontario. He first got involved with the NDP after attending one of UFCW Canada's week-long political training sessions last year. Brother Brar then participated in the successful election campaign of Ontario NDP candidate Jagmeet Singh, who currently serves as the ONDP Member of Provincial Parliament for Bramalea-Gore-Malton.

Following the 2011 Provincial Election, Upender took up the challenge of the UFCW Canada NDP Membership Contest by helping other UFCW Canada activists register as members of the NDP. The competition's goal was to encourage more UFCW Canada members to join the party, become politically engaged, and have an the opportunity to vote for the new federal NDP leader. UFCW Canada's endorsed candidate, Thomas Mulcair, went on to win the party leadership.

"The NDP is the only political party that genuinely represents workers' interests, so we commend Upender for assisting more UFCW Canada members in becoming New Democrats," said National President Hanley. "With the Harper Conservatives and other right-wing parties launching daily attacks on working Canadians, it is essential for us to organize new party members and campaign for the NDP in order to elect governments that actually care about workers and their families."