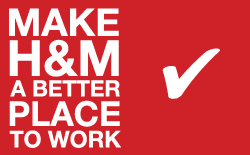 UFCW Canada has applied to represent 60 workers at a Remco warehouse that exclusively supplies to H&M retail stores.

Workers at the Brampton, Ontario facility have organized to join the union due to concerns regarding wages, a lack of recognition for seniority, unpaid overtime, and a refusal by the company to designate temporary workers as full-time.

H&M has signed a supplier Code of Conduct that requires companies to respect workers' rights and international labour standards and the Code extends to third party companies such as Remco. Accordingly, both the warehouse workers and UFCW Canada expect Remco to respect their employees' right to organize and avoid interfering in the certification process.

"We are asking H&M to ensure that Remco adheres to the Code of Conduct and allows the workers to organize democratically without facing intimidation from their employer," says UFCW Canada National Representative Kevin Shimmin. "Developments at Remco are being closely monitored by UNI Global, which represents more than 20 million union members - including H&M workers in Europe - with the expectation that the workers in Brampton will be able to freely exercise their right to organize."