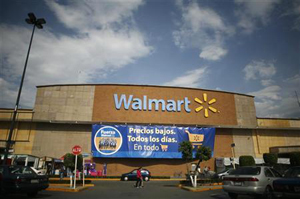 Canada’s largest private-sector union has added its voice to the growing international outcry over the exposed corruption of senior Walmart officials and their alleged cover up of a vast bribery scheme for market dominance in Mexico.

Full details of the purported bribery – which involves over $24 million in payoffs – was fully detailed by the New York Times on April 21 in an 8,000 word exposé entitled “Vast Mexico Bribery Case Hushed by Walmart After Top-Level Struggle.”

The disturbing exposé of the world’s largest retailer by the world’s most respected newspaper comes just days after Walmart held an international investors and analysts meeting in Toronto, where activists from the Making Change at Walmart campaign attended to raise very serious concerns about the judgment of the company’s senior leadership.

“Walmart’s exposed corruption is another red flag for investors,” says Wayne Hanley, the national president of the United Food and Commercial Workers (UFCW Canada), which for the past 15 years has played a leading role in the multi-stakeholder campaign to make Walmart a more responsible and ethical corporate actor.

“For consumers and investors who see value in corporate social responsibility, Walmart’s reported behavior in Mexico is another disappointing example of the world’s largest corporation, controlled by the world’s wealthiest family, acting unethically and it calls into question every sustainability pledge Walmart has made in recent years,” added Hanley. “The corporation’s senior managers have once again showed breathtaking arrogance and recklessness in thinking they can use Walmart’s wealth to manipulate the values and laws of different governments and peoples around the world.”

“That kind of backwardness has certainly been the experience here in Canada ever since Walmart entered the Canadian marketplace in 1994, and more and more countries – like Holland, India and South Africa – are taking note of our experience and turning away from Walmart. The corporation’s soft commitment to social responsibility is hurting the company’s operation and stock price. In fact, Walmart’s revenue and profit growth have been weak, and the company’s stock has significantly underperformed the S&P Retail Index over the last decade,” adds Hanley.

“Walmart is not above the law and it is in all our best interests – including Walmart’s – for the corporation to demonstrate to consumers and investors that its future includes a genuine commitment to social responsibility."