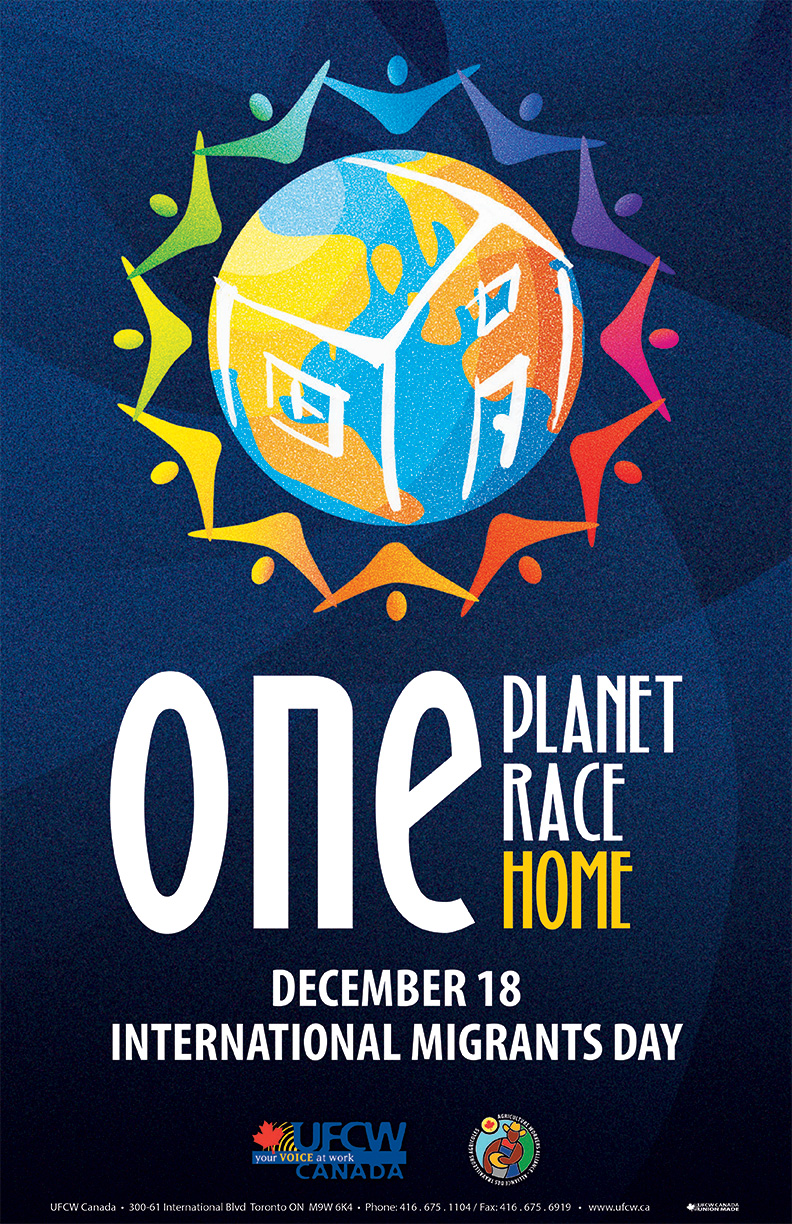 In 2010, UFCW Canada, our community partners and allies continued to fight for dignity and respect for the over 250,000 migrant workers that enter Canada annually.  For instance, in British Columbia, migrant farm workers at Abbotsford’s Sidhu and Sons Nursery (and see) became members of UFCW Canada Local 1518 and successfully negotiated a first collective bargaining agreement with their employer. What makes this victory so important is that, for the first time in Canadian labour legal history, migrant workers were organized as a separate bargaining unit from domestic workers. Similar successes occurred in Quebec as well.

Throughout 2010, aligned with migrant workers, community allies, academics, unionists, and activists, we have been involved in many positive groundbreaking events in support of the migrant workers.

For instance, in May, along with 15 community, academic and labour allies, UFCW Canada launched Education Has No Borders. The event served as the official launch for two exciting new networks: the UFCW Canada Academic Support Network, and Students Against Migrant Exploitation, or SAME, which has already attracted a great deal of interest with several chapters in various universities and colleges across the country.  In addition, the union launched the UFCW Canada Migrant Workers Scholarships for the children of migrant workers.  Since May, thousands of migrant workers from coast to coast have applied.  Through community partners, like Migrante Canada and the Workers Action Centre, migrant workers will also have free access to the union’s webCampus and its hundreds of college accredited online courses.

In response to the G8/G20 meetings in Ontario, UFCW Canada and community partners held No Rights No Rules.  This event had over 300 migrant workers, 100 activists, and thousands more watching the live webcast from around the world. Earlier that same day, which was Father’s Day, the largest human migrant billboard ever in Canada was formed to denounce the treatment of thousands of migrant workers in the TFWP.

From participation in forums such as the Latin American Trade Unionist Coalition , essential conferences such as Metropolis, the International Women’s Conference in Montreal, the World Social Forum on Migration in Quito, Ecuador, or joining the Board of our community partner the Mennonite New Life Centre in Toronto, UFCW Canada and its allies have been continuing to raise the profile of migrant workers’ struggles.

By continuing to raise the profile of migrant workers across Canada, on the streets, in the courtrooms, in the legislatures, and in the minds of Canadians, we are all building a solidarity-based movement that reaches beyond borders and holds our governments accountable for the draconian Temporary Foreign Workers Program.

Other successful strategic national, regional and international accomplishments in 2010 included:

Celebrating victories such as in Quebec for agriculture workers

Joining the boycott against Intolerance in Arizona

Marching with migrant workers in Toronto and Leamington, and at the Canadian embassies in Mexico City and Guatemala

Empowering migrant communities through our online educational and course database

Demanding action on abuse of Guatemalan migrants and celebrating success

Fighting alongside Honduran migrant workers to demand dignity and respect

Demanding justice for migrants killed and injured on the job.

Achieving victory on the international stage through the International Labour Organization and demanding Equal Rights NOW!

Exposing the injustice that continues to plague migrant workers

While we celebrate our shared victories, together we also have battles which have yet to be won.  Migrant workers continue to be the most vulnerable and exploited workers in this country.  Ontario and Alberta perpetuate a cycle of human rights injustices by denying agricultural workers the right to unionize, while the federal government refuses to allow tens of thousands of migrant workers an avenue to attain permanent residency.  There is little doubt that the issue of migrant workers is, and will be, a key concern for decades to come.

In commemoration of International Migrants Day, which is celebrated as a day of resistance on December 18 annually, UFCW Canada has commissioned a poster commemorating December 18th International Migrants Day, with the theme ONE PLANET, ONE RACE, ONE HOME.  These posters are available for download in Spanish, Tagalog, English, Mandarin and French.

Please download these posters and join us celebrating December 18th - International Migrants Day by placing them in your workplaces and distributing them widely in your community and across your networks.

As well, UFCW Canada will be participating in a variety of International Migrants Day celebrations across Canada:

In 2011, TOGETHER we will continue to work with our partners for dignity, justice and respect for migrant and immigrant workers.