UFCW Canada activists joined over 100,000 Quebeckers in Montreal on August 15 to stand tall for basic fairness and equality by participating in the city’s 18th Annual Gay Pride Parade. 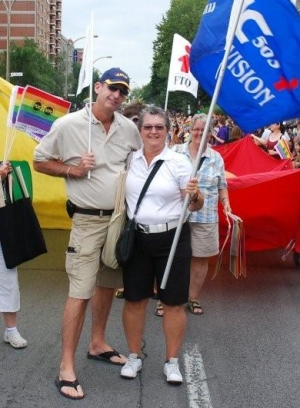 As always, the Montreal Pride Parade was a high energy event that featured a large number of colourful floats, creative costumes and enthusiastic participants. UFCW Canada activists and other union members proudly joined the celebration and marched with the massive crowd from the city’s Gay Village toward downtown.

“Today is another great example of the LGBT community’s awesome ability to organize and the huge contribution the pride movement is making toward creating a truly inclusive society,” said UFCW Canada National President Wayne Hanley while proudly marching alongside many other trade unionists and UFCW Canada members.

“It’s also another example of how fighting for progressive social change can be a lot of fun,” added Brother Hanley, pictured enjoying the pride celebration with long-time UFCW Canada activist and parade participant  Louise Lefebvre, who also serves the union as a staff representative for Local 503.

“Although gay rights have come a long way in Quebec, our union brothers and sisters who are gay still face many injustices, and the fight against discrimination is far from over,” says Quebec Provincial Council President Louis Bolduc, who also took part in the Montreal celebration. “Today is all about standing in solidarity for equality and working toward a better, fairer future.” 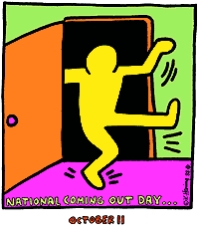 In addition to major parades in Montreal, Toronto, Calgary, Vancouver and other large Canadian cities, the pride movement is also promoting “Coming Out Day”, which is an internationally-observed civil awareness day for coming out and discussion about gay, lesbian, bisexual and transgender issues. “Coming Out Day” is October 11.