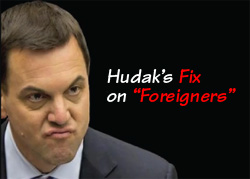 Ontario PC Leader Tim Hudak recently let his real politics slip by calling new Canadians “foreigners” and attacking a new program that will better allow newcomers to work in the jobs they were invited to Canada to do.

Hudak’s bullying is so shameless that even the former PC Leader, John Tory, is says the Mike Harris-like politician has gone too far:

[Hudak is] “pandering to the worst emotions of envy, jealousy and insecurity about so-called foreigners. …..

“Come on Tim – don’t put the brochures out stirring up envy and negativity about the exact same kind of program [you support] which does not come at the expense of long term Ontario residents who still have total access to the other Billions of dollars in training programs,” said Tory on CFRB Newstalk 1010.

To find out what other people are saying about Hudak’s Fix on Foreigners – including the editor of the Toronto Star – check out the following links: