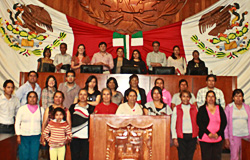 Tlaxcala, Mexico – July 21, 2014 – UFCW Canada recently joined with the Collective for a Migration without Borders – a non-profit organization comprised of a diverse array of migrant advocacy groups –  and the Committee on Migratory Affairs of the Congress of Tlaxcala to push for reforms to Mexico's Migration Act that would strengthen temporary migrant workers' rights.

To generate a proposal for legislative reform on this issue, the Collective and the Committee called on civic leaders, migrant workers, and scholars to participate in roundtable discussions regarding the Law of Protection and Care for Migrants and their families in the state of Tlaxcala, Mexico. The meetings also focused on developing recommendations for a new Migration Act that would promote, respect, and guarantee the human rights of migrants and their families.

During the roundtable discussions, UFCW Canada delivered a presentation outlining public policies that would strengthen the labour and human rights of temporary migrant workers, with input from state and municipal governments. The union's analysis was based on the experience of over 2,000 Tlaxcalan workers participating in Canada's Seasonal Agricultural Workers Program (SAWP), who suffer from deficiencies in health and training and who lack fundamental rights while working in Canada.

UFCW Canada's participation in the roundtable discussions came on the heels of the union's renewed commitment to advocate for temporary workers in the region of Tlaxcala by working in collaboration with local non-profit organizations and government institutions in the area.