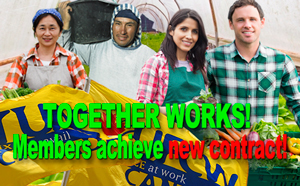 As part of the new agreement, the Ferme B. Cousineau et fils employees – who work at a farm located in Saint-Roch-de-l'Achigan, Quebec – will receive guaranteed hours, the right to return to work after the first harvest season, guaranteed minimum compensation, paid overtime hours, a pay bonus, and special leaves of absence.

“This agreement for the members at Ferme B. Cousineau et fils is an important victory for agriculture workers," UFCW Canada Local 501 President Alain Lachaîne said after the announcement of the arbitrator-imposed contract."It’s a very positive step in the right direction, and we will continue to pursue our efforts in the agricultural sector so that all farm workers can enjoy fair wages and reasonable working conditions,” Brother Lachaîne added.