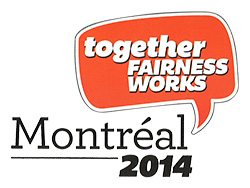 Montreal – May 9, 2014 – UFCW Canada was a leading force at the 2014 Canadian Labour Congress (CLC) Convention, where over 4,800 trade unionists – including 400 UFCW Canada activists – came from across the country to gather in Montreal, Quebec for the Congress’s triennial conference.

From May 4 to 9, the UFCW Canada delegation – which was one of the largest at CLC’s 27th Constitutional Convention – represented a strong voice at the Convention’s plenary sessions, workshops, and committee meetings, where the success and future of the labour movement’s Together Fairness Works campaign was a key topic of discussion. In addition, UFCW Canada led a number of forums that dealt with pressing issues such as public child care, garment worker safety in Bangladesh, and young workers’ rights.

Canada’s best union was also a driving force behind various resolutions that called for the federal government to introduce better protection and monitoring against the exploitation of migrant workers; an open, transparent review of the Temporary Foreign Workers program;  a pathway to citizenship for temporary foreign workers; a nationally-funded, high quality child care system; and a renewed push to make Retirement Security for Everyone a reality in Canada.

UFCW Canada’s cutting-edge display booth surpassed all others in the promotional area of the Convention hall, exposing thousands of delegates to the important work of Canada’s private sector union. The content at UFCW Canada’s display booth clearly conveyed our union’s role as the leading and most progressive voice for workers in this country, and UFCW Canada’s award-winning CD, “100 Years of Solidarity”,  was massive hit with delegates who visited the booth.

UFCW Canada National President Paul Meinema also sat on the committee that oversaw the CLC Officer Elections. In a close contest that was decided by only a few dozen votes, delegates elected Hassan Yussuff as the new President of the CLC. Barbara Byers, meanwhile, was elected as the Congress’ Secretary-Treasurer.

The Leader of Canada’s Official Opposition, Thomas Mulcair, was warmly welcomed by conventioneers on day five of the national gathering. In a compelling speech that brought delegates to their feet, Mulcair promised to build a Canada that works for everyone, as opposed to those who are well-connected.

Finally, in her Keynote Address to Convention delegates, Toronto Star reporter Susan Delacourt cited UFCW Canada’s infographic on the Mike Duffy Senate scandal as an effective example of communicating with voters in the digital age, and denounced the Harper government for treating Canadians as simple-minded consumers rather than citizens with real needs.

The next CLC Convention is scheduled for Spring 2017.