Tell Crown Holdings to stop its attack on workers 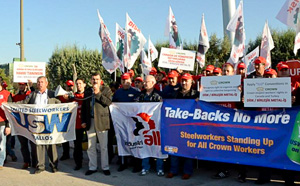 Toronto – January 21, 2014 – UFCW Canada is urging activists and allies to add their voice to the call for Crown Holdings to stop its attack on 120 Toronto workers forced on strike since September. Crown Holdings is a giant U.S. multinational with 149 plants around the world manufacturing food and beverage cans.

Despite Crown's huge profits, which doubled in 2012, Crown has demanded that United Steel Workers (USW) brothers and sisters at Crown's Toronto factory accept drastic wage cuts and a freeze on pension benefits. Crown's anti-worker, anti-human rights agenda has also struck in Turkey, where the Crown has blocked its employees from exercising their democratic right to join a union.

"Crown Holdings' demands are completely unjustified," says UFCW Canada National President Paul Meinema. "We stand with our USW brother and sisters in their worldwide international action to hold Crown and all of its board of directors responsible for their greedy attacks on workers."

One key director of Crown Holdings is Arnold Donald, who is also the CEO of the Carnival Cruise Ship line. Tell Arnold Donald and other board members to end their union-busting tactics at Crown Holdings in Toronto, and at other locations around the world. Click here to send your message.