In wake of super typhoon Haiyan, UFCW Canada donates over $40,000 to support relief efforts in Philippines 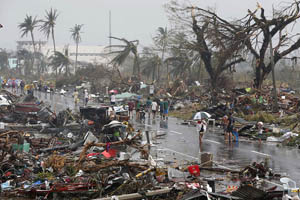 "What the Filipino people need right now are the basics of life - food, clean water, dry shelter, and warm clothes," says Paul Meinema, President of the UFCW Canada National Council. "As such, UFCW Canada's National Council and Local Unions are donating over $40,000 to support desperately-needed relief efforts in the Philippines."

Super typhoon Haiyan has affected more than 11 million people and, in the wake of the disaster, thousands are feared dead. Tens of thousands of families have lost their homes and are currently suffering due to shortages of necessities. Ongoing relief efforts are striving to provide hundreds of thousands ofpeople with clean water, food, and assistance in the days and weeks ahead.

"On behalf of UFCW Canada's 250,000 members, our hearts are with all those whose loved ones have been affected by Haiyan, and our sincere condolences go out to those who have lost family and friends to this catastrophic typhoon," says Brother Meinema.

"The destruction and suffering caused by this horrible tragedy require us to come together as a union to show that our strength lies in helping people in need," says the UFCW Canada leader. "That is why our union is supporting the vital work being done to rebuild the Philippines."

In addition to their immediate donations, UFCW Canada's National Council and Local Unions are asking members to send individual donations to Oxfam to help start the process of rebuilding in the Philippines. UFCW Canada members can make a donation today by visiting the union's dedicated URL on Oxfam's website.