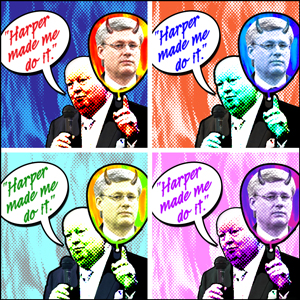 Propelling the October wave was a series of UFCW Canada infographics that took aim at Stephen Harper, his corrupt regime, and the web of deceit surrounding the "Duffygate" senate scandal. One of the humorous memes, called "Harper's Growing Scandal", reached, engaged and entertained more than 430,000 Facebook users with its parody of Boss Harper sprouting as Pinocchio.

Altogether, this series of pointed memes hit the target — not only by capturing hundreds of thousands of views — but also by generating more than 10,000 shares, likes, and comments; as well as driving thousands of visitors back to the main UFCW Canada main web site (ufcw.ca) for additional news, content, and downloads.

The dynamic resonance between the UFCW Canada Facebook page and the UFCW Canada web site has also earned international acclaim. In October, for the second year in a row, ufcw.ca was awarded the Best Content Award by the International Labor Communications Association (ILCA). A UFCW Facebook infographic, "Dear Prime Minister Harper, the Public Purse is Not Your War Chest!” that went viral and earned more than 1,000,000 views, also received an ILCA Award in the category of Best Visual Communications.