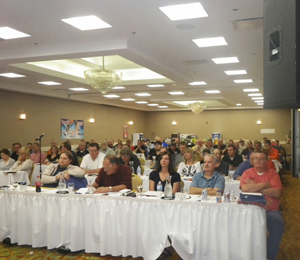 Throughout the all-day workshop, participants shared their thoughts on what it means to be a union member in Canada and why, especially in the current economy, unions are essential to protecting workers and the middle class. The 12R24 members also learned about Tim Hudak's vision for attacking employee rights and putting the province on a path to poverty, as well as the dangers that federal Private Members' Bill C-377 poses to union members' privacy.

According to workshop facilitators, many 12R24 members were shocked to hear that Bill C-377 would require unions to disclose the monies held in their strike funds, thereby exposing the membership’s hand to employers during contract negotiations and labour disputes. Participants were also curious to learn about opportunities to become more involved in their union and how they can stop Ultra-Conservative politicians like Hudak and Stephen Harper from taking Canadian workers on a race to the bottom.

To find out more about the Together Fairness Works initiative and how you can get involved, visit the Fairness section of UFCW Canada's website.