UFCW rallies for healthcare at First Ministers’ Conference in Niagara 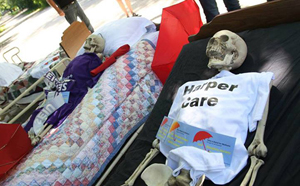 The rally drew hundreds to challenge Stephen Harper’s Ultra-Conservative agenda for the country, and its reckless attack on essential Canadian values and services, like public healthcare, while at the same time concocting policies that further expand the shameful gap between the super-rich and the rest of us.

Of particular concern is Harper’s refusal to engage the provincial and territorial governments in securing a new 10-year Health Accord. The current Health Accord expires in 2014, and Harper has yet to commit the federal government to anything that would strengthen, or even maintain, Canada’s public healthcare system.

Instead, the Harper government is only interested in a reckless approach based on further downloads to the already cash-strapped provinces, forcing further privatization of the system.

The federal share of funding for health care, already low, will decline by $36 billion in coming years. Ottawa plans to leave the risks and the pressures to provinces and territories to deal with on their own. In addition, the Harper government has also cut health care for refugees, RCMP, veterans’ long term care beds, and terminated the Health Council of Canada.