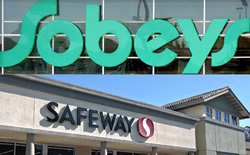 Toronto - June 13, 2013  - Sobeys, through its corporate parent Empire Foods, announced on Wednesday  an agreement to purchase the assets and operations of Canada Safeway. The sale is expected to close in the fall of 2013.

"As Canada's leading retail union, and as the union for thousands of Canada Safeway and Sobeys workers in Canada, UFCW Canada remains committed to improving the lives of UFCW Canada members employed under collective agreements with both companies," says National President Hanley.

"UFCW Canada has had a long relationship with Sobeys in Quebec and Ontario, and with Canada Safeway for more than four decades in Western Canada. We expect that to continue under the new unified Sobeys enterprise."

"While the purchase of Canada Safeway by Sobeys is a significant change in the Canadian food retail landscape, what has not changed are the collective agreements in place with both employers. With the proposed purchase of Canada Safeway expected to close by the fall of 2013, we have reached out to Sobeys regarding a number of questions that need to be satisfied regarding that transition. We do expect Sobeys to live up to the labour commitments in place at Canada Safeway, and have no reason to doubt they will."