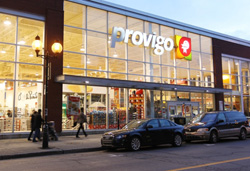 Quebec – May 4, 2013 – Retail food members at the Provigo store in Windsor, Quebec, are now enjoying the benefits of a new collective agreement in their workplace. The retail food workers at this store voted 86% in favour of the agreement in principle reached by their bargaining committee. The new labour contract between UFCW Canada Local 500 and the employer is to expire in April 2019.

Effective on the May 15, 2013 signature date, the contract has average increases of 2% for employees at the top end of the wage scales. By the same token, employees progressing within the wage scales will continue to receive an increase every 600 hours worked.

As for improvements, employees and their family members (spouse and dependents) are getting an increased employer contribution which will provide 80% reimbursement of dental expenses. “Created on January 1, 1975, the UFCW dental plan is unquestionably one of the main advantages that contribute to our union’s reputation. To date, nearly 40,000 members in Quebec are covered by our dental plan, which allows more than 50,000 people to benefit from the plan,” explains Local 500 President Antonio Filato.

Other improvements to the agreement include: