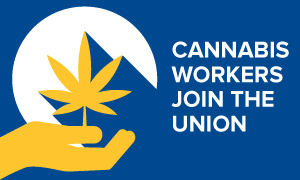 Workers at the historic medical cannabis dispensary have won job protections along with paid staff meetings while they discuss a future contract with the employer.

Budtenders, the employer, and the union provided input to create a unique temporary agreement while the dispensary seeks a medical cannabis license.
“We’re excited to advocate on behalf of the workers at VCBC and support their non-profit’s push to become a licensed medical cannabis distributor,” said UFCW 1518 President Kim Novak.

The union and workers will begin negotiating workplace improvements with the employer over the next few months. Once a tentative collective agreement is in place, the workers will be able to vote over whether to accept the contract and retain their union representation.

In the past, BC BUD members have bargained for and won increased wages, cannabis sommelier training, enhanced store security, and other major improvements to their contracts.

To learn more about the BC BUD division of UFCW 1518, visit their website.

Are you a non-unionized worker who would like to enjoy the benefits of a UFCW Canada union contract? Do you and your co-workers want to gain the union advantage at work? Join Canada’s best union, UFCW Canada, to make your workplace better today. Click here to join now.