Alabama Amazon workers on the cusp of historic organizing victory 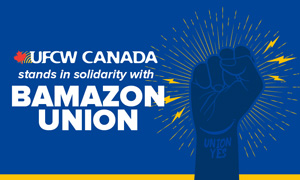 Toronto – March 18, 2021 – Nearly 6,000 warehouse workers in Bessemer, Alabama are on the cusp of a historic organizing victory to be the first to form a US-based Amazon union.

Throughout the union drive in Alabama, Amazon has attempted to discourage its employees from exercising their fundamental right to organize by paying union-busters more than $10,000 per day. But support for their union – the Retail, Wholesale and Department Store Union (RWDSU/UFCW) continues to grow stronger by the day.

The frustration experienced by Amazon workers throughout the pandemic has been intensified by the company’s decision to claw-back a $2 per hour hazard pay premium, and to reinstate disciplinary measures aimed at workers deemed “unproductive.” This, despite the extraordinary efforts of these courageous frontline workers to meet the day to day needs of the public, and despite the fact that injury rates at Amazon have grown steadily over the last four years.

Hashtag #BAmazonUnion #UnionYes to show your support and follow @BAmazonUnion and @RWDSU for the latest on the campaign.