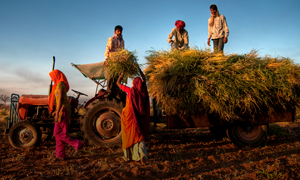 Toronto – February 12, 2021 – UFCW Canada proudly stands in support of Kissans and farm workers across India in their call for sustainable and equitable agricultural laws that promote food security and workers’ rights in the country.

Over the past few months, Kissans, farm workers, journalists, and supporters across India, including trade union activists, such as Nodeep Kaur, have been abducted and aggressively assaulted for simply exercising their rights. They have been protesting three new bills that the government passed undemocratically, which aim to deregulate farming and will effectively crush marginal farmers, known as Kissans.

Additionally, the new farm laws will steer farm workers into greater poverty. Even with guaranteed crop prices, farm workers were already unable to earn fair and living wages for their labour. In fact, the reforms will impede farm workers’ ability to exercise their right to freedom of association and further violate international labour standards that India has committed to as a member of the International Labour Organization.

In response to the demonstrations, state police instigated violent attacks against protestors. Kissans, journalists, and union activists who have been abducted by police are being tortured and sexually assaulted in prisons. The Indian government has since introduced internet blackouts and social media crackdowns to prevent journalists from covering the events.

UFCW Canada stands united with national and international labour advocates, such as the International Union of Food, Agricultural, Hotel, Restaurant, Catering, Tourism, Tobacco, and Allied Workers’ Association (IUF)’s, for progressive agricultural reforms in India that also protects the rights of farm and migrant farm workers’ rights in the country.

As an organization advocating for food workers’ rights, we denounce the violent attacks against protestors and adamantly express our support for Kissans and farm workers in India and their collective and urgent calls for justice.

To learn more about how the Candian labour movement is addressing this problem, click here.