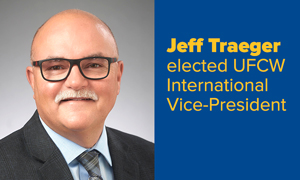 Washington, D.C. – January 27, 2021 – UFCW Canada congratulates UFCW Local 832 President Jeff Traeger on his election to the UFCW Executive Board as International Vice-President. Brother Traeger was sworn into office during the board’s virtual meeting on January 26, 2021.

“Jeff is an excellent addition to the UFCW Executive Board,” says UFCW Canada National President Paul Meinema. “International Vice-President Traeger has demonstrated outstanding leadership at both the local level – as the president of one of Canada’s largest local unions – and the national level, as Vice-President of the UFCW Canada National Council, and trustee for CCWIPP and the NDF. Now, he will help guide our great union internationally.”

President Traeger was first elected President of Local 832 in 2011, after serving many years in a variety of local union roles, including secretary-treasurer, bargaining representative, and shop steward. Through his long-time advocacy and leadership, Jeff has improved the lives of thousands of UFCW Canada members through bargaining contract gains with some of Canada’s largest employers.

Brother Traeger joins National President and International Executive Vice-President Paul Meinema, and International Vice Presidents Wayne Hanley, Antonio Filato, Shawn Haggerty, and Kim Novak on the board to represent the perspectives of UFCW Canada members, and to lead the union’s efforts to build a better life for workers throughout North America.