National Day of Remembrance and Action Against Islamophobia 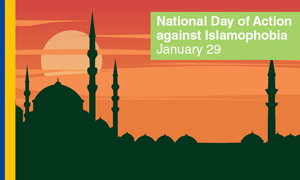 On the National Day of Remembrance and Action Against Islamophobia, we remember the victims of the hateful attack on a Quebec City mosque on January 29, 2017: Ibrahima Barry, Mamadou Tanou Barry,Khaled Belkacemi, Abdelkrim Hassane, Azzedine Soufiane, and Aboubaker Thabti. They were fathers, sons, husbands, brothers, and community members.

Since 2017, the National Canadian Council of Canadian Muslims (NCCM) and community partners have called on Canada’s federal government to designate January 29 as a National Day of Remembrance and Action Against Islamophobia.

Islamophobia, a form of systemic racism and religious discrimination, is generally defined as the irrational fear and hatred of the religion of Islam or Muslims. From 2012 to 2015, Statistics Canada reported that hate crimes against Muslims grew over 253 percent in Canada. In 2018, data demonstrated that violent hate crimes against Muslim populations were more likely to involve female victims, compared to other hate crimes. In May 2019, Statistics Canada released a report that indicated Muslims are more likely to encounter cyber bullying. Still, these numbers only provide a small snapshot of the discrimination that Muslim people encounter, as most hate crimes often go unreported.

January 29 therefore provides an opportunity for us to acknowledge that combatting racism, xenophobia, and Islamophobia is an urgent task in labour activism. Multiculturalism often functions to hide the inequalities that Muslim people face in this country. Following the lead of Canadian Muslim organizations, we remember the victims of the Quebec City mosque attack, including those who died or were injured, to make sure that a tragedy like this never happens again.

As labour activists, we must do our part to challenge all forms of hate in our work to improve the lives of working Canadians.

Here are two ways that you can take part in National Day of Remembrance and Action Against Islamophobia on January 29: