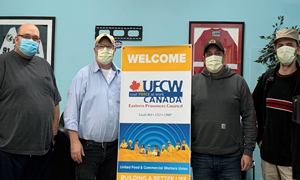 The new four-year contract adds language that protects workers against discrimination while making improvements to bereavement and sick leave. Retiree and LTD benefits have also increased, in addition to single and family coverage plans.

The contract also sees increases for Personal Protective Equipment (PPE) in the last two years of the contract while language protecting the overtime bank has been strengthened.
As a result of the bargaining committee’s determination members will see an increase of $2.10 per hour over the life of the contract, in addition to $0.70 per hour increase to shift-premiums.

UFCW 1288P is a long-standing member of the UFCW Canada Eastern Provinces Council, which proudly serves thousands of union members across Atlantic Canada. To learn more about the UFCW EPC click here.