The International Day for the Eradication of Poverty - October 17 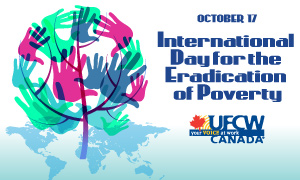 In 1992, the United Nations General Assembly adopted October 17th as the International Day for the Eradication of Poverty. Despite the continued growth in global economic development, millions of people around the world continue to live in extreme poverty.

Poverty is not only an economic issue as the lack of basic income perpetuates poverty. The United Nations acknowledges that persons living in poverty are also more likely to experience dangerous working conditions, unsafe housing, lack of nutritious food, unequal access to justice, lack of political power, limited access to health care.

Racialized people in Canada are more likely to experience poverty. In 2015, it was reported that 1 in 8 Canadians live in poverty. However, there was a substantial income gap between racialized and non-racialized Canadians. This wage gap is larger for racialized and Indigenous women.

The 2016 Census showed that 20.8% of peoples of colour in Canada are low-income, compared to 12.2% of non-racialized people. Additionally, 80% of Indigenous people living on reserves in Canada live in poverty.

These are alarming statistics that needs the immediate attention of our federal government.

While there are welcome changes in Canada’s Poverty Reduction Strategy, the plan still requires to address the multi-faceted ways in which people experience poverty.

Canadians need programs, such as a universal childcare program and national pharma care, and a continued investment in eradicating poverty.