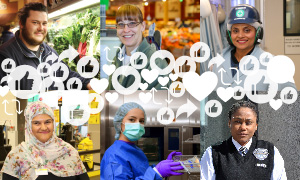 Toronto – March 26, 2020 – As UFCW Canada and its Local Unions work hard to keep members and the public informed during the COVID-19 pandemic, UFCW social posts thanking members on the front lines for their vital work throughout the crisis have engaged hundreds of thousands of Canadians across the country.

As one example, UFCW Local 1006A’s Facebook post praising grocery store members and asking shoppers to #ThankAGroceryWorker for all that they do has garnered over 49,000 engagements and reached more than 312,000 Facebook users, demonstrating the gratitude that Canadians have for UFCW food retail members as they keep the country fed in this time of need.

Meanwhile, UFCW Local 1518’s tweet announcing that Save-on-Foods members will receive a $2 an hour pay boost in response to the incredible work they are doing during the COVID-19 pandemic has earned 4,900 Likes, 993 Retweets, and 78 Comments as of March 26, suggesting the public strongly supports pay premiums for workers on the front lines.

Elsewhere on social media, UFCW Canada’s Instagram posts thanking “The Real MVPs” in the health care, food retail and processing, transportation, and hospitality sectors have been a major hit with users, as Canadians from coast to coast show their appreciation for front-line workers in UFCW core industries.

In Manitoba, UFCW Local 832’s Facebook post announcing new wage increases and more safety protections for members at Maple Leaf Foods has attracted hundreds of engagements and reached thousands of users, illustrating the widespread support for food manufacturing workers who are keeping our food supply intact during the COVID-19 pandemic.

Last but certainly not least, TUAC Quebec’s social post thanking meat processing members at Cargill and announcing new pay premiums and safety measures for all members working at the company’s facilities across North America has engaged thousands of Canadians who are eager to show their gratitude for the essential efforts of food manufacturing workers.

“UFCW members working on the front lines of this crisis are doing an incredible job of rising to the challenge, and the widespread support that is being shown for members on social media is a testament to the heartfelt appreciation that Canadians have for front-line workers and their integral efforts,” says Paul Meinema, the national president of UFCW Canada.