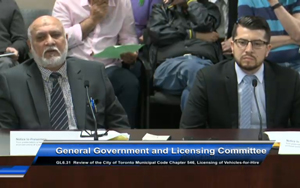 Toronto – January 8, 2020 – UFCW Canada, the union for Uber, Lyft, and other ride-hailing drivers, welcomes the City of Toronto’s introduction of new “vehicle-for-hire” regulations aimed at improving safety for drivers and passengers, but would like to see further reforms that empower drivers with enforceable labour rights and health and safety standards.

Under the new regulations, ride-hailing, taxi, and limousine drivers in Toronto must complete a city-approved training program that will cover safe driving, driving in an urban environment, anti-racism, and sensitivity. Current drivers will have to complete the program by the end of 2020 while new drivers will be required to take it beginning June 1. Drivers must also have at least three years of driving experience to be eligible for employment and must securely mount any handheld devices inside their vehicle. As well, all vehicles will now include “watch for bike” notices reminding passengers to watch for cyclists before exiting.

“The City of Toronto’s new vehicle-for-hire regulations are a good first step for improving driver and passenger safety, and our union welcomes any measures that raise the floor for driving standards in the ride-hailing and taxi industries,” says Pablo Godoy, UFCW Canada’s National Co-ordinator for Gig and Platform-Employer Initiatives.

“However, until ride-hailing drivers have the ability to unionize and enforce their rights at work, drivers will continue to experience abuse from their employers and will lack real mechanisms to protect their health and safety on the job. That is why additional reforms, like collective bargaining rights, are needed to truly empower Uber and Lyft drivers.”

The new regulations come on the heels of a formal submission and political action campaign from UFCW Canada that called for mandatory training and background checks for ride-hailing drivers in Toronto, as well as capping the number of drivers allowed to operate at any given time and banning the automatic de-activation of driver accounts without investigation and appeal.

Since launching the Uber Drivers United campaign, UFCW has become the leading voice for ride hailing drivers in Canada, signing up hundreds of Uber Black drivers in Toronto and now spearheading organizing efforts in B.C., as well as other parts of the country. To learn more about the campaign to bring justice and fairness to Uber and other ride hailing drivers, visit UFCW’s Uber Drivers United website.