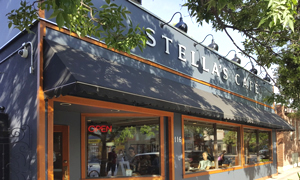 UFCW Local 832 had been trying to bargain a fair deal with the employer since earlier this year. When the two sides were unable to reach an agreement, the union made an application for first-contract legislation at the Manitoba Labour Board.

“After some rocky negotiations, we are proud to say that the members working at Stella’s on Sherbrook have their first union contract,” says Jeff Traeger, President of UFCW Local 832. “We expect to finalize a deal for the members at the Osborne location shortly.”

After mediation, the employer and the union gave their proposals to the labour board, and the board imposed a contract from there.

The new contract brings a 5 percent increase in wages for staff, as well as paid breaks, increased vacation percentages, a benefit plan, and other gains.

As well, the new contract brings the backing of the union grievance procedure to solve any future workplace harassment issues or other problems that may arise.

The union represents all servers, expos, dishwashers, cooks, hosts, and baristas working at Stella’s Sherbrook. To read about the new collective agreement at Stella’s, click here.