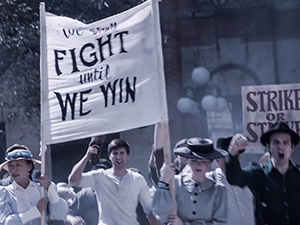 Toronto – September 19, 2019 - The lessons and era of the Winnipeg General Strike will soon come alive to 500,000 high school students – thanks to “Stand,” a new movie musical that was made possible in part with the support of UFCW Canada, other labour allies, and the Canadian Museum for Human Rights.

“Stand” recently had a premiere screening in Toronto, where UFCW activists and allies filled a downtown theatre for this fictional Romeo and Juliet story set against the backdrop of 1919 Winnipeg, where on May 15, more than 30,000 workers went on a general strike.

In the wake of the General Strike, two strikers were killed, thirty were injured, and strike leaders ended up on trial, but ultimately it was a turning point in uniting the labour movement and obtaining collective bargaining rights.

“Stand” the movie is based on the musical “Strike” and was composed, co-written, and produced by Winnipeg’s Danny Schur. “This movie is to encourage activism, to teach history, and to be entertaining and educating at the same time,” says Schur, who attended the premiere, along with director Robert Adetuyi and members of cast. “As a major supporter, thank you to UFCW Canada for helping make this possible.”

Through the support of UFCW Canada and other labour allies, “Stand” will be digitally delivered through the Canadian Museum for Human Rights, to half-a-million Grade 11 students across the country, following its commercial theatrical run later this fall.

“We’re proud to have helped bring ‘Stand’ and this important and compelling story to a new generation,” says Paul Meinema, the national president of UFCW Canada. “The power of solidarity, of standing together for our labour rights and human rights is just as vital today as it was a century ago.”