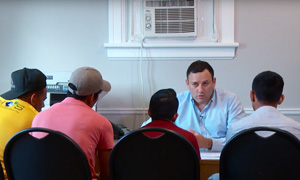 St. Catharines, Ont. – September 10, 2019 – UFCW Canada has helped a migrant worker from Mexico obtain one of the first open work permits in Ontario after the worker in question experienced abuse from her employer while working at a farm in the Niagara Falls area.

Maria has been working in Canada for the past three years under the Seasonal Agricultural Worker Program (SAWP). She originally worked at a greenhouse in Leamington, Ontario, where she encountered no issues with management or her co-workers.

However, when Maria started working at a flower farm in St. Catharines, she began experiencing daily harassment from her supervisor, who would physically intimidate her and yell at her. In addition, her employer confiscated her passport and refused to deal with the harassment issues that she was enduring.
Eventually Maria developed symptoms of anxiety and depression due to the persistent bullying and intimidation she was receiving at the hands of her supervisor. She attempted to have her employer address this behaviour, but was refused, and this made her feel as though she was trapped in her situation.

Then, Maria attended an information session in Leamington hosted by UFCW Canada. At the session, she learned about newly announced open work permits that are intended to help migrant workers who are suffering abuse. Maria immediately contacted our union for assistance, and now she is one of the first recipients of an open work permit in Ontario.

“While we are relieved that Maria has been able to escape her abusive situation by securing an open work permit, much more needs to be done to protect migrant workers who are vulnerable to abuse,” says Paul Meinema, the national president of UFCW Canada. “That includes allowing more workers to permanently reside in Canada, enabling unions such as UFCW to run hiring halls that can place workers with trusted, law-abiding employers, and extending the right to unionize to all farm workers, including migrant workers,” he adds.