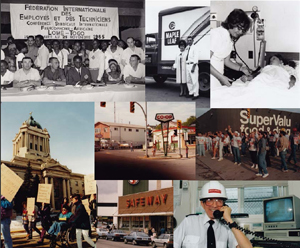 Winnipeg – February 2, 2013 – UFCW Canada Local 832 is celebrating its 75th anniversary this year, representing an outstanding history of leadership and activism as Manitoba’s leading voice for food, retail and commercial workers.

"We are very excited to be able to commemorate this important event with so many people that have played a part in making this a great Local Union," says Local 832 President Jeff Traeger.

From protecting the integrity and security of workers to improving working conditions, wages and benefits, Local 832 has taken up the fight for workers’ rights in Manitoba for 75 years and continues to fight for those rights today.

“Over the past 75 years, Local 832 has built one of Canada’s strongest and most progressive Local Unions,” says UFCW Canada National President Wayne Hanley. “On behalf of UFCW Canada activists across the country, we congratulate our Local 832 Sisters and Brother for this remarkable milestone, and many years of outstanding service to UFCW Canada members in Manitoba and generations of working families throughout the province.”

In addition to its proud past, Local 832 continues to improve living standards though collective bargaining, and to serve the membership and all working families as a leading force labour education. In fact, Local 832 is currently working with the province’s NDP government to provide English as a Second Language (ESL) programs to hundreds of members and their communities. The Local Union also runs one of the country’s most dynamic training centres, offering members a wide variety of courses in skills development and worker empowerment.