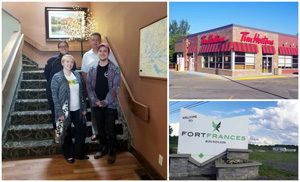 As part of their new union contract, the Tim Hortons employees will receive yearly wage increases, three days of bereavement leave, and seniority rights for scheduling, vacation, and time-off requests. Workers will also gain increased vacation entitlement and improved access to an optional benefits plan. In addition, a night shift premium and supervisor premium have been introduced, and employees will now enjoy paid meal breaks and defined hours of work.

“This is a breakthrough agreement that will allow Tim Hortons workers to build a better life and have a voice on the job,” says Dominic Musitano, President of UFCW Local 102. “The five-year deal provides job security to employees as well as benefits that are rarely seen in the fast food industry.”

Prior to ratifying their first collective agreement, workers at the Tim Hortons in Fort Frances approached UFCW Canada in hopes of gaining fair wages, job security, and seniority rights at work. The employees joined in the union in Spring 2019 and a contract was negotiated and ratified shortly thereafter.

“We had a very positive bargaining experience with the employer and arrived at an agreement that works for both sides,” says UFCW Canada Executive Assistant to the National President Barry Sawyer, who led negotiations for the union. “The members are extremely happy with the gains they have achieved, and the employer was eager to reach a fair deal.”

As the voice of Canada’s food workers, UFCW represents over 250,000 members working in the hospitality and food retail and processing industries, as well as other sectors of the economy. UFCW is Canada’s neighbourhood union, representing hard-working people in more than 600 communities across the country.