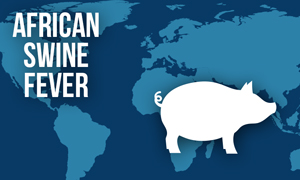 While there have been no reported cases of ASF in Canada, the spread of the disease in parts of Asia and Europe has increased the risk of ASF entering Canada. If the disease were to reach Canada, it could lead to major losses for hog farmers, meat processors, and workers in the pork industry, who would be unable to export Canadian pigs and pork products globally.

According to the Government of Canada, the most likely way for ASF to enter the country is through the importation of undeclared meat products, brought in by travellers or sent to Canada through postal services. That means border guards and detector dogs are the first line of defence in preventing ASF from spreading in Canada.

In response to this threat, the government is providing the Canada Border Services Agency with up to $31 million over the next five years to increase the number of detector dogs that screen for food, plant, and animal products at international airports.

“UFCW welcomes this investment, as it will help prevent contaminated pork products from entering Canada and will go a long way in protecting our pork industry from the significant economic threat posed by ASF,” says UFCW Canada National President Paul Meinema.

“An ASF outbreak would not only devastate our pork industry and threaten thousands of good-paying, union jobs – it would also impact the entire agri-food sector and undermine Canada’s reputation as a global leader in food safety,” the UFCW leader adds. “That is why our union is encouraged to see the government taking action to address the challenge of ASF.”

Prior to the government’s announcement on new investments for combating ASF, UFCW Canada met with the Minister of Agriculture and Agri-Food, Lawrence MacAulay, as well as the NDP Agri-Food Critic, Alistair MacGregor, to advocate for procedures and resources aimed at protecting the Canadian pork sector from an ASF outbreak.

You can help bring attention to this potentially devastating disease by sharing UFCW Canada branded media about ASF on social media. Members, activists, and allies can also raise awareness of ASF by asking friends, family, and colleagues to avoid importing pork products into Canada from foreign countries. For more information on the disease, see the Canadian Food Inspection Agency’s Fact Sheet on African Swine Fever.