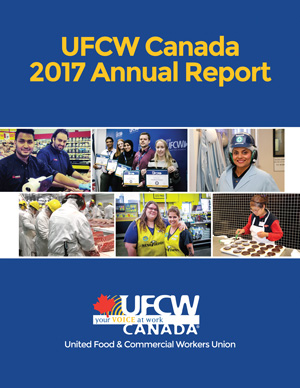 The 38-page report showcases major achievements in UFCW Canada’s collective bargaining, political action, organizing, and education efforts over the previous year, and explores the union’s advocacy on behalf of women, young workers, and equity-seeking groups during that period.

"2017 saw our union win major legislative victories for workers and their families, launch bold new initiatives at the 12th National Council Convention, and continue our outstanding fundraising efforts for the LLSC and United Way, among other notable accomplishments,” says Paul Meinema, the National President of UFCW Canada.

"Our union’s tireless work in these areas not only helped to advance workers’ rights across Canada, but also put us in a stronger position to bring the union advantage to more workers and make a positive, lasting difference in our communities,” the UFCW leader adds.

Full copies of the UFCW Canada Annual Report can be downloaded in PDF format at www.ufcw.ca/annualreport2017.