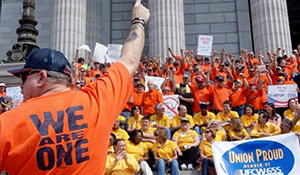 Washington, D.C. – August 8, 2018 – Hard-working families in Missouri have rejected anti-worker legislation that would have devastated good jobs, communities, and the standard of living for future generations.

On Tuesday, August 7, “Proposition A”, a poisonous piece of legislation that would have allowed irresponsible transnational corporations and corporate actors to divide and exploit hard-working people, was voted down by voters in a state-wide referendum.

“This is a historic defeat for those corporate and political elites who believe workers should earn poverty wages and struggle with no benefits, and a major victory for every hard-working Missourian who believes that their right to affordable health care, better wages, and retirement security must be protected,” says UFCW International President Marc Perrone.

“Through their vote, Missourians have made their voices loud and clear by taking a stand for their right to negotiate together for a better life. It is time for those in political power to stop proposing legislation that needlessly hurts workers, their families, and destroys good jobs. It is time to put hard-working families first.”

“On behalf of all UFCW Canada members and their Locals Unions, we congratulate our sisters and brothers in Missouri for having the foresight and courage to fight back and to stop this blatant assault on the middle-class and the achievements of hard working families and their hard-earned living standards,” says UFCW Canada National President Paul Meinema.

“The efforts and actions of UFCW activists and their neighbours in Missouri provide us with a leading example of how to stand up to and stop regressive bills and right-wing attempts if and when they creep up in other North American jurisdictions,” adds Meinema.