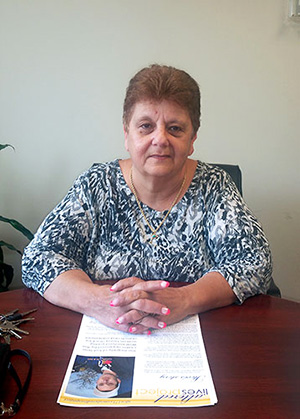 Mississauga, Ont. – July 17, 2018 – Debbie is a worker and UFCW Canada Local 175 member who wanted to make a difference in her workplace. Through her employment at a meat processing plant in the GTA, she got involved in health and safety and participated in union committees. Debbie enjoyed her work and the relationships that she built with her co-workers. She dedicated herself to improving working conditions and being a voice for others.

She enjoyed her work and had no plans to stop. At home, Debbie led an active life. She enjoyed spending time with her grandchildren and often went camping and fishing. Other hobbies for Debbie included crochet, baking, and bowling night with her husband.

While Debbie worked in several different departments at her workplace, her job in the sanitation department began to take its toll on her health. A lack of proper lifting equipment led to a slip and fall on a wet, icy floor that pulled Debbie’s tendon in her knee. Another fall, which led to multiple injuries, resulted from an uneven floor. “These incidents were all preventable,” says Debbie. “But the company wasn’t listening.”

Despite her injuries, Debbie wanted to keep working and be productive. She tried to return to work on modified duties working in different areas, but she couldn’t continue. Debbie went through several surgeries to repair her knee and hand, and she had regular cortisone shots for her shoulder. She went to physical therapy often as well. All of this took place while Debbie waded through many WSIB appeals.

All of this took a toll on Debbie’s emotions and finances. Her life had changed forever. She couldn’t enjoy the things that were important to her active lifestyle. She became just a spectator at her regular bowling night. This left Debbie quite depressed.

“If it hadn’t been for the support of my husband, family, and friends, I would’ve been lost,” says Debbie. “My quality of life sucks since my surgeries.”

But Debbie tries to concentrate on that strong support system. She thanks her family for doing the simple things she took for granted, like cleaning the house or baking. She credits her good friend Sandy for getting her to all of her appointments and WSIB meetings.

“If I didn’t have the Union’s support through the battle with WSIB, I wouldn’t have received the positive result on my claim after 10 long years,” Debbie adds. “I’m so grateful to the Workers’ Compensation department at UFCW 175 for their dedication and hard work.”

This story has been adapted from the UFCW Canada Locals 175 & 633 Altered Lives Project, which aims to promote healthy, safe, and supportive work environments. To read the full story, click here.