UFCW 1518 wins against Sobeys at B.C. Labour Relations Board 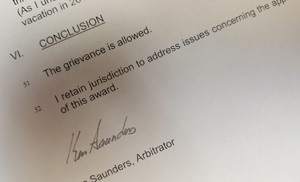 Vancouver – December 20, 2017 – The British Columbia Labour Relations Board has ruled that Sobeys must pay roughly $300,000 in vacation entitlements to more than 500 UFCW Canada Local 1518 members. The ruling confirms the union’s interpretation of the Sobeys collective agreement regarding vacation pay.

Previously, Grid B employees working at Safeway received vacation pay according to the B.C. Employment Standards Act. But in the last round of collective bargaining, the union negotiated superior language that substantially increased the vacation pay these members would receive in 2017.

The union filed several grievances in late 2016 after Sobeys indicated that, in 2017, the company would pay the members according to the old contract language.

“Sobeys’ actions meant many of our members had to choose between taking time off without pay or forsaking their vacation time off. This meant they wouldn’t have time away from work to spend with family and friends, or attend to personal matters,” UFCW 1518 Union Representative Dave Archibald told the board.

“Delaying implementation of the collective agreement language either deprived members of the benefit of vacation entitlement or deprived them of compensation, causing financial hardship during the holiday season,” he added.

Arbitrator Ken Saunders agreed that Sobeys must pay the wages owing to these members. Sobeys appealed the decision and recently applied for a stay, which would further delay the implementation of the award.

“They’re dinging our members twice: once last year around the holidays, when they incorrectly paid out vacation. And again this year – just before the holidays – by seeking to delay paying members the wages an arbitrator ruled they were owed,” Archibald said. “Quite frankly, it reflects very poorly on Sobeys.”

UFCW 1518 President Ivan Limpright praised members for speaking up when they saw an infraction of the collective agreement. “It’s important for members to understand when their rights are being violated so we can work together to defend them,” he said. “Sobeys has to learn that they need to respect and follow the contract. It is not optional. And we will fight them every time they try to deny members their rights and benefits guaranteed under the collective agreement.”