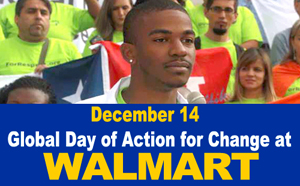 Toronto – December 13, 2012 – The world’s leading civil society organizations are joining forces with community members around the globe on Friday, December 14 to make an important stand for change at Walmart by asking the retailer to start respecting the rights of 2 million Associates.

This Friday, UFCW Canada activists in cities from Vancouver to Halifax will be leading the effort in Canada by gathering at various Walmart locations to have direct conversations with workers and shoppers about the need for change at the world’s largest retailer and third largest employer. The only entities who employ more people are the Chinese Army and the US Department of Defense.

In addition to the Canadian actions, similar actions are also set to take place on December 14 in Argentina, Brazil, Chile, India, Nicaragua, South Africa, the United Kingdom, the United States, and Zambia, all countries who recently joined forces to make historic change through the UNI Global Walmart Alliance.

UFCW Canada activists, friends, supporters and are also leading the way online, where supporters are mobilizing to spread the word about the Global Day of Action through Facebook, Twitter and Tumblr (changewalmart.tumblr.com).

Everyone is invited to join the Global Day of Action by taking part in the online effort and by downloading materials to hold their own solidarity actions.

“The recent Black Friday strikes across the United States inspired people around the globe – including a growing number of Walmart workers in Canada – to take action,” says UFCW Canada National President Wayne Hanley. “They also reminded us that if we stick together and combine our efforts, we can make change at Walmart, and that change is essential to achieve the level of fairness that all workers need and deserve.”