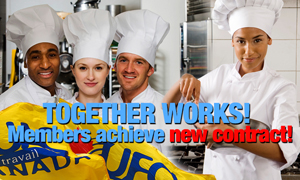 Members achieved wage increases ranging from 4% to 10%, with two increases each year giving workers at least 3% per year, thereby eliminating hourly progressions. They will no longer have their seniority calculated on the basis of accumulated hours. Instead, going forward, seniority will be based on the date of hire. Furthermore, job postings will now include positions of all types. Members also gained improvements on several other fronts, including:

“This new labour contract enables unionized employees to improve their work conditions. Once again, the bargaining committee has demonstrated our commitment to defending the quality of our members’ jobs!” says Daniel Nadeau, Local 501 Director for Eastern Quebec.