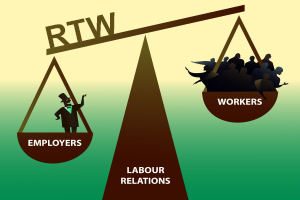 Since 2012, conservative politicians across Canada have unsuccessfully pushed for so-called "right to work" laws, claiming they are needed to attract manufacturing jobs, boost wages, and reduce unemployment. But the track record of these laws in the U.S. shows that right to work is harmful to both workers and the economy, and is simply a political tool designed to weaken unions.

So what is "right to work"? Basically it bans unions from collecting dues through payroll deductions from workers who are covered by union contracts. Under the current system in Canada, employees in a unionized workplace can choose to join the union or opt out, but every worker has to pay union dues. This arrangement prevents free riders – that is, workers who refuse to join the union – from using the benefits and services provided by the union while neglecting to pay dues. Under right to work legislation, workers are not required to pay union dues but can still receive the benefits and wages negotiated by the union, as well as the services that it offers.

Another claim that advocates of Work For Less make is that it improves the economic competitiveness of a region by reducing unemployment. But a 2012 Fraser Institute report found that Canada's 10 provinces – all of which rank ahead of U.S. states in terms of labour rights – ranked in the top 21 states and provinces for labour market performance between 2007 and 2011. The rankings were based on job growth, unemployment, and productivity growth. Also, as of August 2014, four of the six U.S. states with the highest unemployment in the country were Work For Less states. So there goes that theory.

Granted, part of the reason why politicians have so far failed to implement Work For Less in Canada is because Canadians have more favourable views toward unions and the social programs that they fought (and continue to fight) for, and because unionization rates are much higher in Canada than in the U.S. However, the fact that Work For Less proposals have reared their ugly heads in Saskatchewan, Alberta, and Ontario in the last few years suggests that we can expect to see similar proposals down the road. In the meantime, let's spread the word among our friends, family, and neighbours that the "right to work for less" is the wrong choice for workers.